Approach from the A832 Contin/Gairloch road. Follow the A832 from Marybank towards Strathconon. After one mile you will reach Loch Achonachie on the right. Carry on this road for another three miles and you will reach Loch Meig. The boats are located approximately three quarters of the way up the loch. Access is gained onto the car park through a combination locked gate. 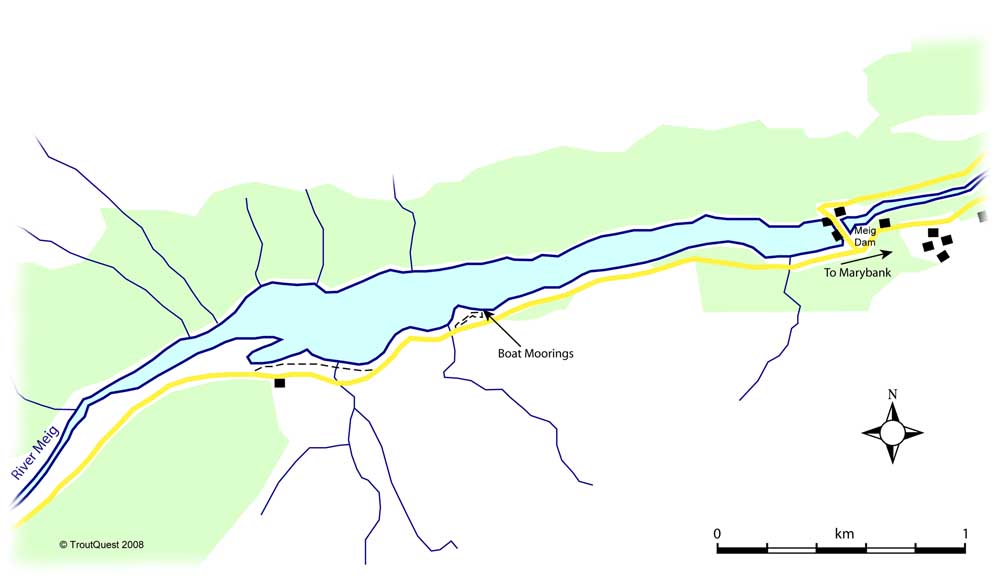 Loch Meig is a long, narrow, hydro-electric loch lying on the river Meig and impounded by Curin Dam at the east end. It is two miles long lying east to west and approximately 350 yards wide. It is largely surrounded by forestry plantation though some harvesting of the trees is ongoing. At the west end of the loch it widens out to form a comparatively shallow bay with a depth of around 10 – 12 feet (depending on water levels).

Predominantly brown trout averaging 1lb in weight but there are bigger fish running into double figures. Loch Achonachie Angling Club which administers the fishing, augment the wild stock with around 800 – 1,000 brown trout every year. These range in size from 1 ½ to 4 lbs.

There is also a natural head of perch, some of which grow onto to a large size of well in excess of 3 lbs.

Salmon and occasional sea trout enter the loch from June onwards but as per Fishery Board rules, these must be returned unharmed.

This is a fly fishing only loch, best tackled from the boat – although good bank fishing can be had on occasion at the west end where the river enters. The west end is generally the most productive area but fish can be found all over the loch – particularly when fishing the margins on a long drift.

Use traditional wet flies in the early months with Kate MacLaren, GRHE, Greenwells Glory, Invicta, Cinnamon & Gold and Black Pennell being among the best. From July onwards, sedges can work well with ginked up Loch Ordies, G&H Sedges and Heather Moth working well fished either as a bob fly or as a single dry. Buzzers can be good any time of year but you will have to vary the depth and colour to find the right combination. Small black hackled spiders (some with palmered bodies) fished in sizes 18 through to 24 can be deadly.