Come and fish with us and enjoy excellent trout & salmon fishing

in a beautiful part of the Scottish Highlands.

As we approach the end of June the windy weather has made fishing tricky at times, Scardroy and Meig in particular have been difficult. Perseverance and a good drogue have paid dividends for some with fine trout taken subssurface, a 16lb salmon was caught & returned safely too. Determined anglers have enjoyed some fine fishing days. Always remembering what they say however - it's called fishing - not "catching"- and a good number of blanks were recorded over the day on June 11th with ten teams of three fishing the Meig Open Competition. If you have not renewed your membership you're missing out. For a quick and easy way to renew just email achonachie.angling@gmail.com and pay by BACS (bank transfer).

Pictured below is the sheer joy of a young angler's first ever salmon - from one of our beats on the Upper Conon 1 May 2021 - fish early & often!

Best brown trout so far this season a 3.6lb brownie, on "silver butcher" on intermediate line fished slowly - Tight Lines ! Please feel free to capture photos and send us stories of your outings.

ALL VISITOR PERMITS ARE NOW AVAILABLE THROUGH OUR BOOKING AGENT CONTIN FILLING STATION 01997421948 CASH PAYMENTS ONLY AT THE FILLING STATION THOUGH YOU CAN GET CASH BACK FOR THAT IF MAKING A CARD PURCHASE FOR FUEL, FOOD ETC.

– CHECK OUT THE ”CLUB WATERS” PAGES TO CHOOSE YOUR VENUE 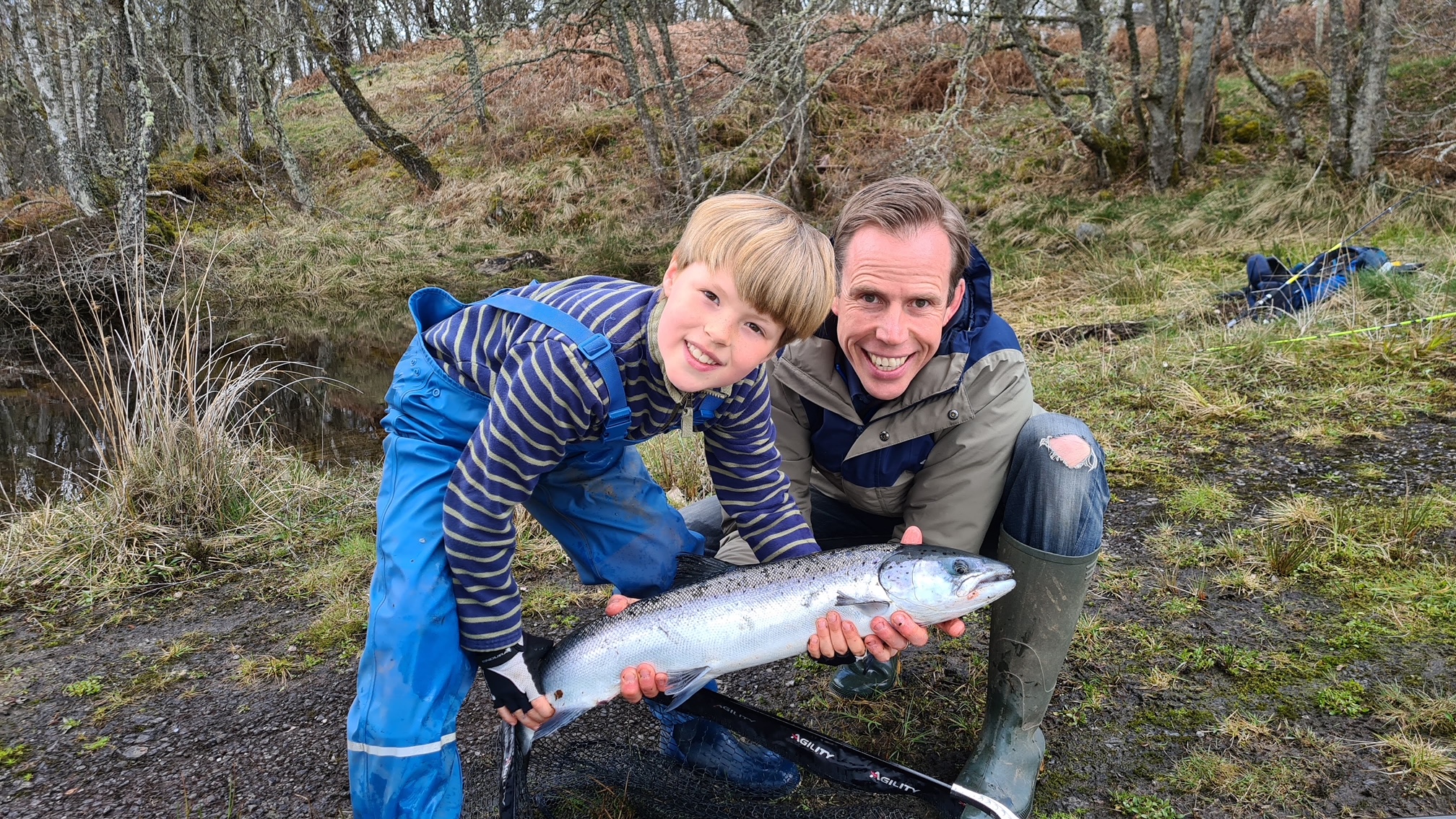 New members can download an application form from the website by following this link https://highlandfishing.net/member-benefits/become-member .... all details for joining online are on the downloadable form.

Loch Achonachie Angling Club controls Salmon fishing on the Upper Conon and Upper Blackwater rivers in the Ross-shire Highlands and wild Brown Trout fishing on both of these rivers along with Loch Meig, Loch Achonachie and Loch Scardroy.

Amongst our waters you can also find fine Sea Trout, Arctic Char, Perch and Pike. Details of permit prices and membership costs are available here. The season in all our waters mainly extends from 1 April to 30 September inclusive for all species. In season 2020 we began opening our waters for Brown Trout on 15 March running until the 6th October. The season for salmon on the Conon system starts 1 April and ends on 30 September.

The club has a membership of almost 300 anglers including some keen junior members in 2022. Fishing is open from 1 April for visitors buying day tickets and it is still possible to join the club by completing the application form via email and paying by BACS or posting the form and paying by cheque. To join the club email achonachie.angling@gmail.com

A full set of Club Rules can be downloaded by Clicking Here and are also available by email from achonachie.angling@gmail.com

Boats are available for hire on each of the three lochs between 1 April and 30 September.

General safety information for anglers can also be downloaded by Clicking Here.

The club makes provision for the disabled. There is easy access to the riverbank in designated areas and a 'Wheely Boat' is provided on Loch Meig. The boat has been custom built to accommodate two wheelchairs plus helpers, making for a great day's fishing with a buddy for each wheelchair angler..

The club can provide Gift Vouchers and we can arrange for suitable gifts for Christmas, birthdays and special occasions in any value wanted inclduing annual memebrship. These are available from achonachie.angling@gmail.com

Loch Achonachie Angling Club was formed in 1953 by local anglers, to administer the fishings on the Upper Conon, Loch Achonachie, Loch Meig and the Upper Blackwater, on behalf of the then Hydro Electric Board – now SSE.

In 1985, Hydro Electric decided to sell their fishings on the Conon and Blackwater rivers and the club was faced with the possible loss of access to the Upper Conon and Upper Blackwater salmon and trout fishing.

Starting with only £300.00 in the bank, the club set up a fund-raising committee. Through a number of innovative fund-raising schemes, together with grant aid from Ross and Cromarty Leisure Services, help from HIDB, and a sizeable monetary gift from Lochluichart Estate, the club were able to purchase the Upper Blackwater and Upper Conon Salmon and Trout fishing.

Organisation of the Club

The club has over 250 ordinary and junior members and 50 life and honorary members. These members reside primarily in the locality e.g. Strathpeffer, Dingwall, Strathconon, Beauly, Black Isle, Fortrose, Inverness etc. but we do have members from as far away as Glasgow, Orkney, Wolverhampton, London, and Devon. Membership is growing at present and we always aim to increase the number of junior members over each season.