Approach from Marybank on the A832 Muir of Ord/Gairloch Road. Follow the minor road A832 Marybank to Strathconon west up the side of the River Conon. Swing left and uphill as you approach the entrance to the Tor Achilty Dam (no fishing access there) and keep on the main road until you see the loch on your right. Carry on past the entrance to Fairburn Wind Farm on left until you see Orrin Power Station downhill on your right. You will reach a large vehicle turning area on the right at the power station entrance. Immediately past this entrance to the Power Station there is a locked barrier at the top of the track which leads down to the boats at the loch side. This track is suitable for most vehicles. 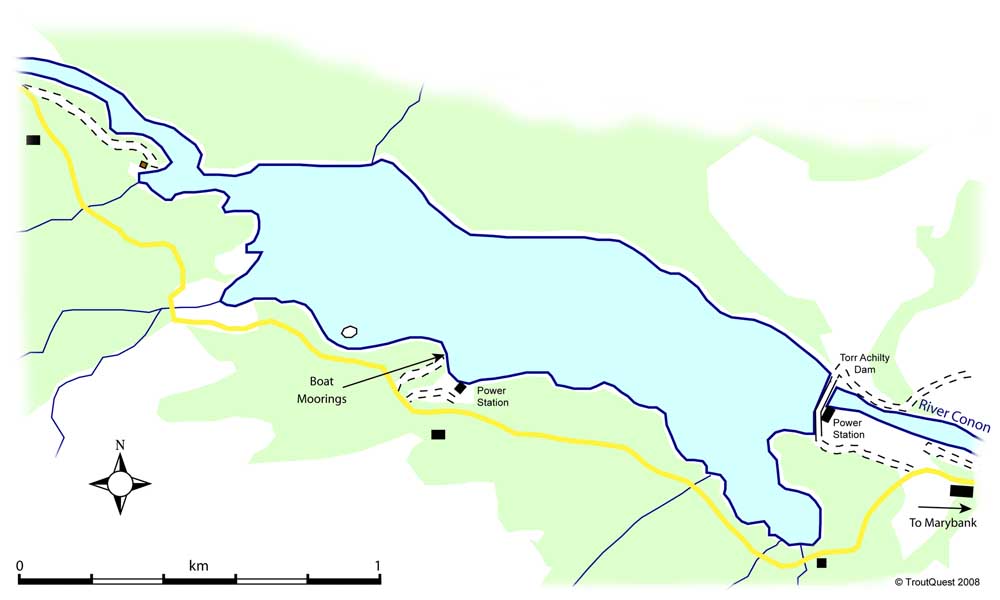 Loch Achonachie is over one mile long and up to 400 yards wide. It lies on the River Conon and is impounded as part of the Conon hydro-electric scheme. It is deep in places – particularly on the old river channel running down the north shore. There is a small island in the middle of the old river channel at the west end where the river enters and also a small island in a shallow bay on the south shore. It is largely surrounded by forestry plantation but recently there has been extensive harvesting.

Salmon from June onwards when the water temperature is high enough to encourage the fish to run through the Borland Lift in Tor Achilty dam, and they will continue to run into September. There is also a good stock of brown trout – some growing to very large size and fish of over 6lbs have been caught. The Club is augmenting the stock with fish of around 1lb each year.

There is also a natural head of perch with some very large pike which have been recorded well into double figures.

Spinning and fly fishing is permitted but there is an absolute ban on bait of any kind. There is very little access for bank fishing and boat fishing is the norm. Most salmon are taken by trolling a spinner like a Toby or Rapala but fly fishing for salmon (and pike) is underestimated and salmon can be taken on the fly – perhaps more regularly than anglers appreciate. Flies that have been reported to work for salmon are Teal Blue and Silver, Munro Killer, variants of the Delphi Silver and Blue Charm. Trout patterns are traditional but one of the main fish takers is the winged Greenwells Glory fished wet.

Fish the west end near to where the river enters and along the north shore down the side of Tor Achilty forest with the fly. Spinning will take fish (if they are taking) almost anywhere but particularly by the outflow from the Orrin power station. Take care here because there are some submerged snags and concrete blocks which can be dangerous if the water is low.